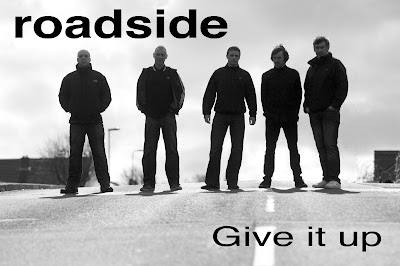 Paladin Radio had just picked up Roadsides new single " Give it up" for air play worldwide. Great song for a great cause.

Duncan from the band has set up to release a charity single, with all donations going to  Scope (cerebral palsy) and Derriford cardiac ward. Duncan is also doing a bike ride from London to Paris in 24 hours to raise money for the Charity's. The band is very keen to do everything possible to raise money for the Charity's as they are both close to Duncan's heart. Duncan's dad passed away late last year and through this Duncan got to see the brilliant work and effort from the cardiac ward at Derriford. Duncan has always done bike rides for Charity and this year he has decided to raise money for Scope (cerebral palsy). The Single has been released and is available on itunes and amazon mp3 or www.roadsidetunes.com

This year roadside have already released a live ep and are now recording a new single Disarm which along with Charity single Give it up they will tour around England and Europe.
www.roadsidetunes.com
www.twitter.com/roadsidetunes
www.facebook.com/roadsideplymouth
Posted by Unknown at 1:45 PM