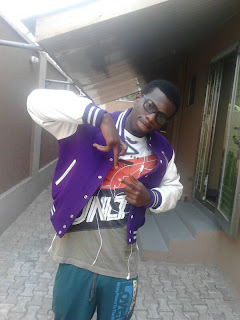 "I'm just a sick dude hoping to make a living out of metaphors and punchlines..." Popularly known as OghenePunstar or Mr Pun Star, he started rapping at age 14 but became a rapper at age 17. Pun Star started rapping under the influence of 50 Cent's Get Rich Or Die Tryin'. The now 22 year old rapper hails from Delta state, Nigeria but is based in Lagos state, Nigeria.
Pun star's style of rap sits comfortably on lyrical strength. And as the name implies pun i.e. wordplay is involved. This rapper, with a name that provokes questions & thoughts, has been able to live up to his name so far. This he does by flaunting his lyrical prowess on his verses, hooks & quotes. Feature Pun Star on your song & you'll be glad you did.
He has also graced several shows with his entertaining & energetic performances. He has a B.A in Mass Communication. He represents the Nasty Sounds Academy {N.S.A}. His latest work, Street Dreams EP can be downloaded at http://4shared.com/mp3/oCUHi8dQ/WHO_DEY_MOZ.html
http://4shared.com/mp3/NRQpGDAa/PuN_sTaR_FrEeSyYlE__K-sHaDoW_p.html
Posted by Unknown at 2:47 AM