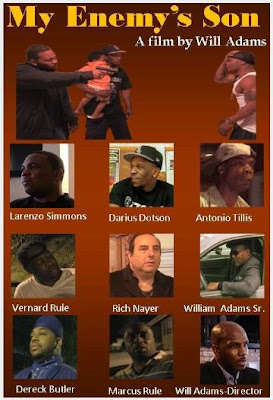 My Enemy's Son is the crime drama that will have you on the edge of your seats wondering what is going to happen next. Viewers will be intrigued by how T-Low stays 10 steps ahead of the law, while barely escaping sudden death. This film shows how the code of the streets puts a street hustler's human ethics to the test.

The scene is set in Chicago on the south side. T-Low (Larenzo Simmons) is a mid level hustler that gets a call from Jay (Darius Dotson) about a sweet deal on street merchandise. T-Low had his reservation about the seller because Cheeks (Antonio Tillis) never had the means to put his hands on the level of product T-Low can afford to pay for. Despite T-Low's doubts about Cheeks he decides to take the risk because of the price. If the deal goes through he can stand to make a lot of money and do something else with his life. He just doesn't know what.

Since T-Low has reservations about this current deal, he takes Man Man (Vernard Rule) to meet as backup incase things go afoul.